Mommy, why is it all black?

What do you say to your precocious two year old daughter when she has lost her eyesight and asks the unimaginable question, “Why is it all black?"

When Merlyn was born she had medical issues.  Melissa and Steve Hileman accepted that their little girl Merlyn would be visually impaired, but spent countless hours in hospitals and doctors’ offices trying to save their daughter's small amount of vision.   After dozens of surgeries they lost the battle to give Merlyn sight.  Devastated they now had to deal with total blindness.
"Miss Independent" by Melissa Hileman 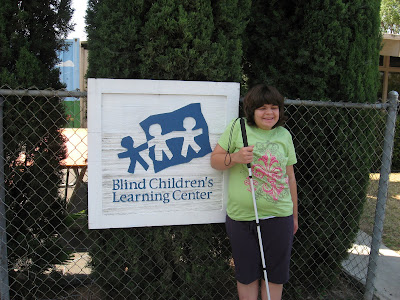 Merlyn was born full term, but with complications.  Her umbilical cord was wrapped across her chest and she was not breathing.  After being resuscitated, the doctors found that Merlyn had a dislocated hip, hole in her heart, and cloudy corneas.  After a week in NICU we traveled to Los Angeles to see specialists and it was revealed that Merlyn had congenital glaucoma and a rare eye condition called Peter’s Anomaly.  We were advised that she would need cornea transplants and possibly several other surgeries to help to establish vision.  Over the next two years we spent every week in hospitals and doctors’ offices.
Once we knew our daughter was going to be visually impaired we contacted Blind Children’s Learning Center.  Fortunately we were familiar with the school because of a nephew who had attended the school several years earlier.  Merlyn immediately began services through the Infant Family Focus at home program.  When she turned a year old Merlyn attended the Early Childhood Center on the campus.  She was very sensitive to sounds so her first year of school was spent being rocked by “Grandma” Mary or in a hammock swing to help comfort her as she adjusted to the sounds of the room.  Over the years the teachers and therapists worked together to slowly integrate her into noisy situations.
Another obstacle to Merlyn’s learning was that her eyesight was constantly changing due to cornea transplants, lens removals, glaucoma and retina detachments.  After two years and dozens of surgeries, we lost the battle to give Merlyn sight. It was devastating time for us.  We accepted that our daughter would be visually impaired, but now we had to deal with blindness.
The one thing that really helped us cope with this new “problem” was Merlyn's ability to adapt.  Just two weeks after losing her eyesight, she was actively exploring her classroom.  She began trailing the walls and counting her steps.  She was getting around so well that we thought that she might have regained some sight. But after further testing and exams it was confirmed that she was still totally blind.  That’s when we realized just how quickly she had learned to adapt to her new situation.
Merlyn is a very precocious young lady and after she lost her eyesight she asked me, “Why is it all black?” My husband Steve and I choose to tell Merlyn in simple terms the truth.  “You were born with eyes that did not work.  The doctors helped you to see for a little while, but then your eyes broke.”  As the years went on we started adding more medical terms such as glaucoma, cornea transplant, and retina detachment to explain why her eyes “broke.”
Over the next three years at Blind Children’s Learning Center Merlyn learned to use a cane and echo location.  She learned Braille, typing and how to ride a bike.  At very young age she learned to do a lot of things on her own.  She constantly told us that she was “ Miss Independent.”
Merlyn was almost six years old when she graduated from the Center.  She transitioned into a public school first grade class, where she confidently explained to her sighted classmates although she couldn’t see with her eyes she can see with her hands, ears, mouth and nose. 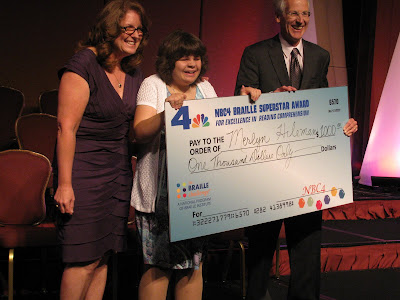 Today Merlyn is almost 13 and starting the 8th grade in the fall.  She's an avid reader.  Recently, she competed with students from across the country and Canada in the National Braille Challenge Competition.  Out of all 60 competitors she had the highest score in reading comprehension and was awarded the "KNBC 4 LA Braille Superstar Award for Excellence in Reading Comprehension" and received $1,000 cash award.

Merlyn’s not all books.  She is a member of the STARR Cheerleaders, the JAG Cheerleaders, Real Trex (outdoor adventures for blind teens), Cedar Valley Show Choir, and is a member of the Avengers Goalball Team.  She also volunteers at our county animal shelter.  She helps socialize puppies and has now decided her career goal is to become a veterinarian.
Merlyn has come a long way and we are grateful to Blind Children’s Learning Center for providing teachers and specialists who are knowledgeable, dedicated and nurturing.  The Center gave Merlyn essential educational and social development skills that have helped her grow into an independent young lady.

Congratulations! Today is your day.

﻿﻿
On July 27, 2011 Blind Children's Learning Center was abuzz with family and friends celebrating the Pre-K graduation and Kindergarten promotion of 19 incredible children from our Early Childhood Center (ECC).  Here are just a few of our shining stars.

A unique aspect of ECC
is the presence of sighted peers.
Sighted children learn alongside
children who are visually impaired.